League of Legends and Dota 2 players are constantly talking trash about each other's game. They did, after all, come from the same game. The generally held consensus is that League of Legends is a simplified version of Dota, but few players can actually name real differences between the two games. But how many Dota or League players can actually name real gameplay differences between the two?

After doing research for this post, I'm convinced that Dota 2 is a deeper game than LoL. However, that doesn't necessarily mean it's a better game than LoL. While I personally enjoy LoL more since I play it casually and it's less punishing than Dota for casual players, I'm not here to give a recommendation one way or the other, just to inform and entertain!

But wait, why are they so similar?

The main reason Dota 2 and LoL are so similar is that, as most people are aware, League of Legends was originally based on Dota -- not Dota 2, but the original Dota 1. 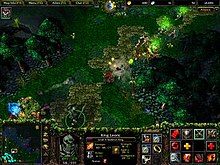 Dota 1 is actually a mod of Warcraft 3, a real-time strategy game similar to Starcraft (and from the same publisher, Blizzard) where you build a base and give orders to a whole army in addition to controlling individual heroes. The mod basically stripped out the base-building and army-commanding aspects of the game, making those auto-controlled by the computer, and allowed the players to focus on the most fun part, controlling individual heroes.

(Little-known fact: an earlier Dota-like mod was created for Starcraft! It was called Aeon of Strife. There were 8 heroes in the game and none of them had any particular special abilities. So if Dota is the "father" of LoL, Aeon of Strife must be the grandfather.)

League of Legends was created as an entirely new game from Dota, with all-new champions, art, lore, and abilities. The main focus of Riot Games when making League was to make it accessible, and this is reflected in its relative simplicity. In comparison, everything in Dota 2 was designed with the pros in mind. Questions the developers had when making the game were decided by "whatever will make the game deeper," that is, more strategic.

Abilities -- which game has more?

In any MOBA, most of the depth and strategy of the game comes from the variety of abilities the characters have. At first glance, LoL seems deeper because its champions each have 5 abilities (4 plus a passive), while in Dota each hero only has 4.

But that fails to take into account item abilities, or "item actives" as they are officially known. In LoL, most item effects are passive -- go a little faster, do a little more damage, be a little tankier -- you get the idea. There are a couple game changing item actives like Zhonya's or Guardian Angel, but those are the exception, not the rule.

By contrast, in Dota almost every single item has a significant active. Because of this, items define the game almost as much as individual heroes do. One example of a common game-changing item in Dota 2 is the Town Portal scroll or TP scroll. This item allows any hero to teleport anywhere on the map after a 3 second channel.

This item is very cheap (50 gold -- the same as a health potion in LoL) and is bought many times every game by every player. It allows all heroes to jump around the map constantly to defend towers, assist with ganks, or catch an enemy by surprise. By contrast, the most similar spell in LoL is the Teleport "summoner spell" (a spell that can be taken on any LoL champion) -- it has essentially the same functionality, but a longer channel time (4s rather than 3s) and a much longer cooldown (5min instead of 80s).

There's a similar relationship between Flash in LoL and the Blink Dagger item in Dota -- the LoL version has a shorter blink distance and a much longer cooldown, and must be chosen as one of your champion's summoner spells, while the Dota version has a very short cooldown (15 seconds) and is available to all heroes with the item purchase.

This also brings me to my next point, which is that:

The general design philosophy of Dota 2 is to nerf only game-breaking power, and buff everything else til it sees play. The designers keep things balanced by spreading a lot of power around to many different heroes and items. By contrast, the general design philosophy of LoL is to nerf anything that is frustrating to play against, buff only the things that are severely underperforming, and keep everything more or less in the middle.

For example, take the ultimate ability Thrill of the Hunt on Rengar, an assassin champion in LoL.

Thrill of the Hunt

This ability allows Rengar to become invisible for around 15 seconds, run around the map, and pounce on an enemy for some extra damage. There has been a crazy amount of controversy around this ability, around "fun" for Rengar players and the players that are getting pounced on. Riot has nerfed and reworked this ability several times, and has added several mechanics to make it more fair, such as the enemy closest to Rengar being warned when Rengar is still pretty far away.

By contrast, the hero Mirana in Dota has an ultimate ability that turns her entire team invisible for 18 seconds.

This ability is just insanely more powerful than anything in League. But Dota 2 designers can add abilities like this to the game, since there are other heroes that have ultimates that are just as powerful, like Enigma's ultimate that, if played right, can render the entire enemy team useless for 4 seconds -- an absurdly long time in a MOBA. Dota 2 even has a cheap consumable item, Smoke of Deceit, that allows any hero to become invisible for 35 seconds.

As stated before, Dota 2 is in general a deeper game, and this is reflected in the rules governing these miscellaneous mechanics.

In Dota 2, you have the ability to "deny" last hits on minions and towers from your enemies by attacking them yourself. In my opinion, denying minions doesn't actually have a big impact on the game, but denying towers does. As explained by Decency:

In Dota 2, if an enemy tower is below 10% HP it is capable of being denied and thus your team is on the verge of losing a lot of potential gold. If your team does not press the issue to force a conflict at the tower, you will lose out on that bonus. In League of Legends, you can just walk away if the other team wants to defend their tower. It's not going anywhere and you have nothing to lose by leaving. If the fight doesn't seem to be in your favor, there's no reason for it to happen.