Like all game developers, I think my game is awesome and that if only more people knew about it, they would download it, play it, and love it.

This has been somewhat of a struggle with Card Crusade. It's been reasonably successful (~$10,000 revenue in 6 months, more info on that in a future post) but we are nowhere near reaching everyone who would like the game. Out of the millions upon millions of people who play games on their phones, only a tiny slice of a percent of those people have bought Card Crusade. So I keep trying to think of ways to expand that slice.

One way that I tried recently is Facebook ads. Fellow devs were largely skeptical that ads would work out for premium games, and their suspicions seem mostly correct. We did not make a profit or break even on this particular advertising campaign, but that doesn't mean that no premium game could ever run a successful ad campaign. I am open but not eager to doing another one of these in the future. 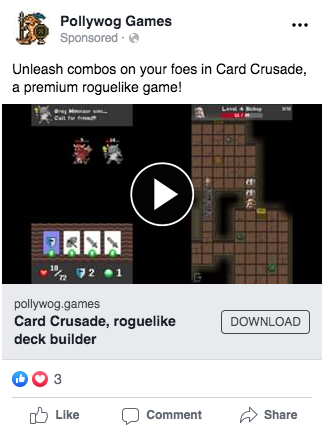 That's what the ad looked like. A brief gameplay video would auto play, and hitting the "Download" button takes you to this page, which automatically redirects you to the iOS or Android store page if it detects that you are visiting from a mobile device.

The likes and one "love" reaction came a couple days into the campaign. I hope whoever reacted to the post bought the game, but it is impossible to know without chasing them down and asking them individually. (This is actually a feasible strategy at our scale, and I may attempt it at some point.)

Here is our targeting information: 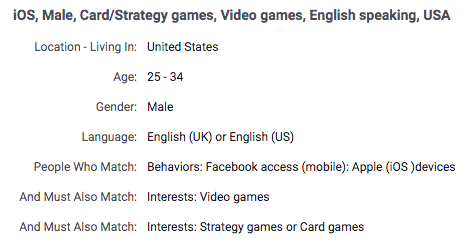 Some brief experimentation showed that this was the audience most likely to click on our ad. Gender, age, and iOS/Android were initially open ended. However, the number of men aged 25-34 using iPhones who were clicking on the ad was much higher than any other group, so I narrowed it down to that to get more clicks.

Ad placement was exclusively in the "Mobile New Feed".

After the store cut and taxes, we profit roughly ~$2.50 for every copy of Card Crusade that someone buys (the game is $4, the store cut is $1.20, I rounded down). Therefore in order to break even, we needed to spend less than or equal to $2.50 for each successful click-through and purchase. For this amount of money, that means 15 copies.

One reason this experiment was inconclusive is how little money we spent. If we do this again in the future, I would spend $50 or more in a single day to see how the spike looked.

$0.27 is a roughly average CPC (cost per click). To sell 15 copies, that means one in every ~9 people who visit the store page actually buys the game. I hoped that was a reasonable assumption, but it turns out it was not. Either due to people only clicking the ad on accident, click farming, an unattractive store page, the lack of a free demo, or people already hitting their monthly premium game budget (would an ad campaign for a paid game be more successful at the beginning of the month?), our link click to purchase ratio was closer to 1 in 50.

We sold 23 copies on iOS from 5/17 to 5/22, the duration of the ad campaign. The previous three 6-day periods sold 23, 19, and 36 (you can look at the in-depth sales data yourself). So it really looks like we sold no more than usual, which is why I quit the campaign after spending less than $40. I give the number 3 above because 3 people liked the ad, and because I'm being optimistic. Who knows, maybe we would have sold 15 that week without the ad!

It will be an eternal source of frustration to me that I do not know why our sales numbers seem so incredibly random. Apple has a complete monopoly on selling iPhone apps, so no one else can build a better store that has better data on how people get to a store page. Android actually has a ton of different app stores besides Google Play, . Maybe we should try listing our game on the Amazon app store?

There are clear spikes when a big, important marketing event happens, like being featured on Touch Arcade or somewhere on the App Store. But the day to day is just so hard to predict.

The campaign could likely have been more successful...

I'm glad I did it! Learned a lot, didn't waste much money, ran a fun experiment.