Everything I'd change about Overcooked

Overcooked, for those that might not be familiar, is a co-op game where players work together to prepare ingredients and make dishes in crazy environments before a timer runs out. It's been very successful, receiving a couple awards, over 90% positive reviews on Steam, and enough sales to justify a port to Xbox, PS4, and Nintendo Switch.

I bought this game a couple months ago for Nintendo Switch, and although it can be pretty entertaining, I come away from most sessions of Overcooked feeling frustrated. What's even more frustrating to me is that in my mind, all my frustration could be easily avoided by some straightforward design changes to the game.

1. Too little difficulty scaling for playing with fewer people

The ideal number of people to play this game is the maximum number, 4. However, sometimes you just don't have 4 people around to play. Most games have a solution for this -- either you queue up and add some rando's from online to your party, or else the game makes adjustments to the difficulty to compensate. Overcooked does make a bit of adjustment to the number of points required to earn stars, but it's quite a small change and doesn't make up for the difficulty inherent in losing a teammate.

The only real gameplay-changing compensation Overcooked makes is for people going totally solo -- they can control two different characters in-game and switch between them at will. So, the main difference between playing with 4 people and playing with 3 people is that 3 people is a bad idea because it's harder to get all the tasks done, with hardly any compensatory score, timer, speed, or environment adjustments of any kind.

Or, why you shouldn't rest all sense of accomplishment on an arbitrary score 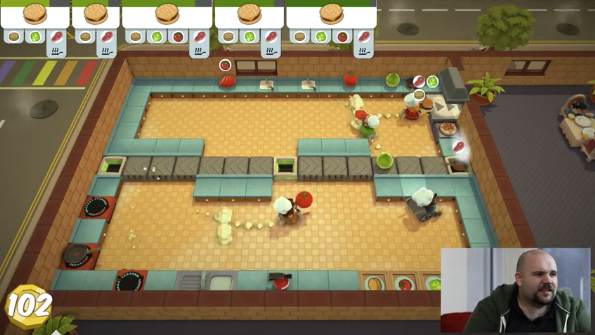 First of all, there's never a point in any level where the players can say "we're finished!" The stream of orders, at the top of the screen, is never-ending. Eventually, of course, you'll run out of time on the level and be given a score based on how many dishes you completed, with additions for completing them faster than necessary, and deductions for letting any orders "time out."

I understand why the game devs structured the scoring this way, since it simplifies the design of the main gameplay -- no need to worry about when to stop giving new orders, and no need for keeping track of "lives" or something more than an arbitrary number. But it really is frustrating to play a level over and over again and, when the timer runs out, to be in exactly the same situation as before -- you've frantically scrambled to get some dishes together, got some done, made some mistakes, but there's still more work to do. You never get the sense of accomplishment (the real one, not this kind) from doing the same amount of work faster than before, or from completing a task that you weren't able to finish before. The only way to gauge whether you've progressed is to ask the people you're playing with, "what was our score last time?" and then try to guess what it was.

It would be much more memorable to have a finite amount of work to accomplish, to race against the timer with, rather than a never-ending stream of work to "get as much done as possible" before the timer runs out. In other words, I'd love it if the last-minute "crap we're almost out of time! Let's see if we can finish one ... or two ... or however many more we can" was replaced by something like "crap we're almost out of time, and we have one hamburger left!"

I do find fun in playing Overcooked. I find it fun to learn new recipes, to use the cookers, to fulfill recipes, and to overcome obstacles. However, the game devs seem to think that all the fun comes from the obstacles. I heartily disagree. Of course the game needs obstacles to be fun, but there are just too many and they're too hard. Maybe I'm missing the point of the game in wanting it to be more of a simulation and less of an exhausting ordeal, but I would love it if they had added more recipes and more fun environments rather than spending so much time putting together so many frustrating scenarios.

The first 5 levels are awesome -- you get a new recipe almost every level, you get a few new ingredients, and the kitchens are pretty straightforward to deal with. However, over the next 9 levels, you get exactly ONE new recipe (fish and chips). This feels like punishment since each level is, of course, harder than the one before, and you're not doing anything more enjoyable as compensation. As you progress through the next few worlds, you get only one recipe on average for each world, while getting 4-6 new ways for the devs get to torture you.

Wouldn't you? Agree or disagree, tell me in the comments below!